For an afternoon or night out with craft beer in Nishinomiya, there aren’t many options available, but fortunately Beer Cafe Barley is not a bad option. The venue is a bit small, and the beers a bit pricey, but their large selection of beer and warm atmosphere are strong draws if you have money to spare and find yourself in the area.

Beer Cafe Barley is one of the only craft beer bars in the Nishinomiya area, especially if you find yourself around Nishinomiya-Kitaguchi station. While there are many other bars around, they mostly serve the standard Japanese macro beers, with the occasional import thrown into the mix.

From the outside, Barley doesn’t look particularly appealing, but the interior is warm and cozy, decorated with polished wood, bottles from around the world, and unique bottle openers. The owner was friendly and inviting when I walked in, and promptly brought my order in less time than it took for me to study the impressively sized menu. The bar seemed a bit quiet when I visited, not only because only one of the around 20 seats was occupied, but also due to the lack of fairly loud music that often plays in bars. The relaxed atmosphere makes this a nice venue to visit and just appreciate a beer and a conversation with friends at your own pace. Adding to the overall comfort, Barley is a non-smoking venue that offers free wifi

Their selection of beers on tap or available in bottles is enough to form a small menu book without including any food options. While many of them are American or European imports, there were also a pair of pages dedicated to Japanese beers. Because the selection is so varied, the prices are as well. The cheapest craft beer on the menu when I went was an altbier by Baeren Brewery at ¥680 for a regular (300 ml) and ¥1100 for a large (473 ml/1 US pint) though many were considerably more expensive, including the Ise Kadoya 8 Reindeers IPA pictured above.

Their food menu is a bit more modest, and contains pizza, pasta, sausages and prosciutto, and sides with a few choices in each category. There are also some additional selections like a liqueur ice cream, shepherd’s pie, and liege-style salad.  Every meal-sized option is about ¥1000 and smaller options are ¥400-600.

How to Get to Beer Cafe Barley

The closest station to Beer Cafe Barley is Nishinomiya-Kitaguchi on the Hankyu line.  The bar is about a 4 minute walk from the station. 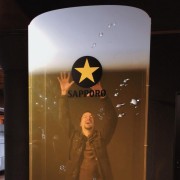